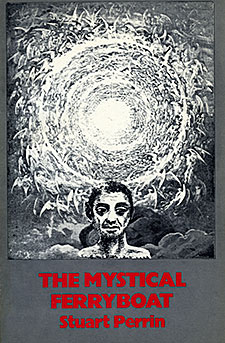 Introduction: “The Mystical Ferryboat itself is an image that came to me in a sequence of dreams. The rest of the book is derived from ideas and visions I have had over a period of many years, intermixed with experiences I have had or things I have seen. I have written this as a way of seeing deeper into my own unconscious. I do not know of what use it might be to anyone else. That is not my concern. l am only interested in expressing the images as they emerge from my unconscious, and following them wherever they take me. The Mystical Ferryboat is the work of a dead man. It is all that will remain of me after my execution.”

I had just left my father’s house. We had had another quarrel about some subject that was forgotten as soon as I entered the dark winter streets.

Night created a bizarre backdrop to the movement about me. Neon lights ﬂickered on and off, swallowing for a moment the silent passing of people, all headed somewhere. The city rose above me like a creature in a dream, its buildings tentacles in the sky. People stared out of windows, their eyes wide and ghostly in the ﬂickering neon.

An old man sat alone on a street corner playing a violin in the glow of a dull lamp. He had a whisp of grey hair, and a face tired and lined with age. But he played a Beethoven sonata as if he held an audience entranced. His music ﬁlled the streets. He played with joy, with love, at one with his instrument. Crowds passed, no one stopped to listen. On occasion, a man or woman would drop a coin into his hat.

I sat on a stoop and pretended that I was in the mezzanine of a theater. The violinist and the pedestrians made up the cast of a ballet. From the wings of my lamplit stage, people entered and danced like puppets dangling from a string, their movements in perfect rhythm with the music of the violinist. I was conductor and choreographer, costume designer and director. Dogs, cats, monkeys and mice joined the procession. Parents and children marched beneath the dull glow of the streetlamp.