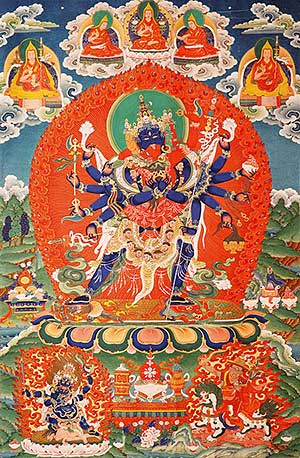 But Tantric Yoga isn’t just an erotic venue used by artists in their search for creative outlets. It’s a living reality that reveals itself when a meditation practitioner uses sexual energy for spiritual purposes. A master of Tantric Yoga has learned to transform life’s lower elements into spirit; he or she has learned that sexual energy is strong enough to transmute tension into a positive force, death into rebirth, and the human into the Divine. All of life in its myriad manifestations is a by-product of sexual energy— a kaleidoscope of form and color running rampant through a less than conscious world, a means whereby the human soul struggles to evolve and reach higher states of awareness.

Just as sexual energy gives birth to all living creatures, it also gives birth to the inner life of each and every one of us. It transmutes elements of our humanity into fuel that feeds Kundalini. This transformation takes place as the male/female (lingam/yoni) energies merge in the sexual area. Through the constant discipline of meditation, the union of masculine and feminine activates Kundalini and nurtures the crown chakra until it ripens and allows the soul of a human being to enter the cosmos and merge with the soul of the universe or God. The marriage of the human soul with the universal soul then gives birth to a river of energy that flows down into a meditation practitioner’s forehead, throat, heart, navel chakra, and sex, and brings with it all the elements of a spiritual life. To a lay practitioner this could easily sound metaphorical— a kind of spiritual poetry not rooted in practical life. But, once the meditation process begins, once a person gets a taste of Higher Energy, they grow aware of a different type of logic, one that defies all human understanding and is connected to the Infinite. The ordinary mind can only function through logic— an attempt to rationalize life according to opposing forces where polarized viewpoints try to make sense of a senseless world. No matter how vast the intellect of the thinker is he or she still tries to imprison the world in a limited realm of understanding. 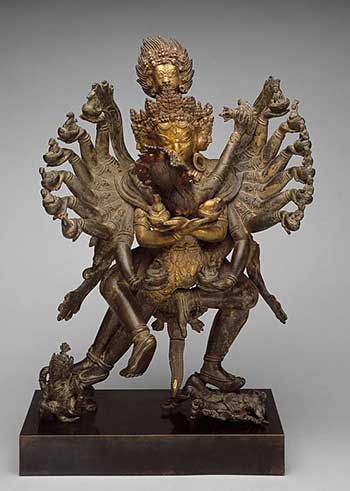 Tantra eliminates conflicting views of life by transmuting the human into the Divine. Its practice teaches us how to give birth to ourselves; its practice also teaches how to transform tension into positive energy. It’s a kind of alchemy of sorts, a means of transforming all human mental and emotional garbage into spirit. When the meditation practitioner draws energy through the sexual area, he or she will undergo a form of death and rebirth— a purification rite that allows spiritual energy to transform both chaos and confusion into wisdom, knowledge, compassion, joy and love. The practice of Tantra helps merge the male/female energies within a human being thereby producing powerful forces that slowly transform the human into the spiritual. The meditation practitioner gains access to the highest levels of his or her own humanity and is helped to live a conscious life in God’s creation.

Years ago, on a visit to the Pashupatinath temple in Kathmandu, I saw many Saivite statues depicting the Nandi (bull), the lingam and yoni (male/female energies) and a rising cobra (Kundalini) and I realized that this Saivite sacred art revealed the process of transmutation that takes place in the sexual area of human beings. The Nandi is the energy of the third chakra (Qi), the lingam and yoni are the male and female principles coming into union as the energy in meditation moves from the navel area through the sexual chakra. The uncoiled cobra represents an activated Kundalini receiving human energy transmuted by the union of the male/female principles (Siva/Shakti). Kundalini feeds off that energy and makes it possible for the soul of a human being to enter transcendental planes of consciousness. Those who practice deep meditation can achieve this state of rebirth by continuously drawing energy through the sexual area to the base of the spine. Men and women in loving sexual relationships where both partners are highly evolved in the art and craft of meditation can use the act of lovemaking to activate Kundalini. Sexual energy brings consciousness to both the outer and inner worlds of every human being. We just have to know how to use it properly. Tantra is less of an intellectual study than a means of attaining enlightenment. It must be experiential rather than intellectual if it’s to achieve profound effects.

The intellectual understanding of Tantra just clogs the human mind with more facts. They might be interesting facts, but nonetheless they’re still facts that disappear when the mind tires of thinking about them. But, the slow evolution of consciousness, the ability to draw energy through the sexual chakra, the transmuting of tension into spiritual energy— all of this is Tantric Yoga and it makes it possible for human beings to attain enlightenment. Tantra is not a yogic practice for intellectual dabblers. It’s a conscious means of using sexual energy to shed all the trappings that keep us from becoming one with God.