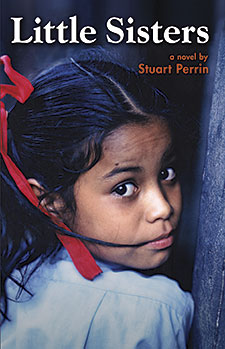 Little Sisters (2012) is a multicultural love and family saga set in New York City, Nepal, and Mumbai, India, taking the reader on a journey into and out of the nightmarish world of international sex trafficking. Beyond revealing the horrors of sex slavery as others have done in documentary style, I have endeavored, through fiction, to render the fate suffered by four sisters and how their lives in a Mumbai brothel transforms them in dramatically different and unpredictable ways.

For more than twenty years I lived, studied and traveled in Nepal and India as an integral part of my learning, ongoing research, and deep interest in the ancient art and religions of South Asia’s respective cultures.

In 1992, my distinguished colleague, Kristina Carlson Jones moved to Kathmandu to open a meditation center. She contacted me in New York and told me about children being abducted and trafficked into sexual slavery. She had met a Nepalese doctor, Aruna Uprety, who detailed the horror of how girls between 10 and 14 years were being bought by sex traffickers in the hinterlands of Nepal for transport to brothels on Falkland Road in Bombay (Mumbai).

In an instant I understood.

“That’s horrible, ” I said to her. “This has to be our work. We must find a way to protect these children. ”

Thus the Bahini (“Little Sister” in Nepalese) Foundation was born, one of the first organizations of its kind in Nepal.

Within a few months, we set up a safe house to provide shelter for the children. We worked closely with Dr. Uprety to identify young girls who were prime targets for sex traders. We went to families in poverty stricken villages and showed them there was an alternative to Falkland Road brothels. At that time, the income of these families was about $15.00 to $20.00 a year. A girl could easily bring $200.00 from a trafficker — and more if she was a virgin. The family would no longer have to worry about raising money for her dowry. She would go to Bombay, Delhi or Calcutta to “work”. No one in the village knew exactly what kind of work, but they all hoped she would send money home to help the family survive.

In a matter of weeks, it became clear — the plight of these prepubescent children was heartbreaking. After many difficult months spent looking for and identifying girls who were potential targets for sex traders, we convinced a few families to forgo the money they could make selling their children and entrust them to the Foundation’s care, and hopefully a dignified future.

Little Sisters arises from my direct experience and awareness of the pain and redemptive passion felt by real people concerned with these issues. I want the reader to become graphically aware of what life is like in the Mumbai red-light district. Beyond revealing the horrors of sex slavery as others have in documentary style, I have endeavored, through fiction, to render the intolerable fate suffered by four sisters at the hands of sex merchants and how each of them is transformed by life in a Mumbai brothel in dramatically different and unpredictable ways.