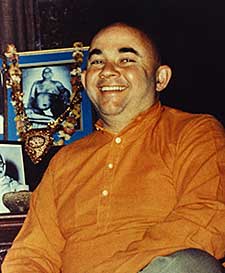 Stuart Perrin has been quietly teaching small groups of students around the world for the last 50+ years. Stuart is a direct disciple of Swami Rudrananda, more commonly known as Rudi. Stuart studied six years with Rudi, and by whose side he was at the moment of Rudi’s death in an airplane crash in 1973.

Rudi was an extraordinary figure, and was one of the first Americans to bring the fruits of Eastern wisdom— stripped free of cultural and religious dogmas— into the hearts and minds of Western culture. Rudi was deeply influenced both by the work of Gurdjieff and Pak Subud but met his root guru, Swami Bhagawan Nityananda in 1960. After Nityananda’s passing, Rudi spent thirteen years studying with Swami Muktananda who he brought to the West in the early 1970’s. Shortly thereafter Rudi broke with Swami Muktananda.

In February, 1973, Rudi was killed in an airplane crash in upstate New York. At the moment of the plane crash Stuart was holding Rudi’s hand, and received his poignant last words, “a deeper sense of surrender,” a profound encapsulation of Rudi’s life and teaching, and the guiding light by which Stuart has lived ever since.

Since his teacher’s passing, Stuart has been deeply influenced by a number of other teachers whose subtle influence manifests itself in his teaching. Chief among these are the venerable Kalu Rinpoche, Sri Ramakrishna Paramahamsa, Sarada Devi, and Ramana Maharshi. While each of these teachers have affected Stuart profoundly, the heart of his teaching is derived from the training he received from Rudi and the precious wisdom gleaned from thirty-eight years of living these teachings fully.

The meditation Stuart teaches— as he learned it from Rudi— is direct and powerful. It is an open-eyed form of kundalini yoga and teaches one to absorb Spiritual Energy, or Shakti, directly into one’s chakra or psychic muscle system. In so doing one learns to burn the tension and difficulty of both life and one’s inner condition and transform all of it into a spiritual life. To “take what’s killing you and make it give you life”, is the heart of it, both of what Rudi taught and what Stuart teaches today. The goal of this work is to become a spiritually enlightened person, which is a person living a profoundly sane and happy life, expressing the amazing depths of one’s full humanity.