Light In Jerusalem: A Memoir 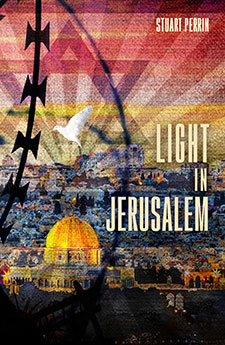 Light in Jerusalem (2018) is a memoir of various and sundry  experiences I had on trips to Israel. Though it’s set in 2006  a time of war in the Middle East, it explores paradoxical situations I experienced on many of my visits to a country that’s the birthplace of three major religions, and a focal point of the modern world’s attention, a country that inspired me to tap vast resources of spiritual energy in myself and to recognize essential truths expressed on different paths that lead to the same place. I discovered that Jerusalem’s mysterious light pierced conflicted thought and opened doors hidden behind political and religious differences, a light that illuminates truth at the source of all humanity’s doctrines and beliefs.

At least once a year for over twenty years, I’ve been invited to Jerusalem to teach meditation and lecture on the application of a spiritual life to everyday living. Jerusalem has become one of my favorite cities on earth. Besides being the cradle of Western religion, besides the ancient and modern architecture melded together seamlessly in many parts of the city—the Jerusalem Market, the Old City, the Western Wall, the Dome of the Rock, and hundreds of other churches, mosques and synagogues— besides disparate religious and ethnic communities that live next to one another in an uneasy alliance, the light in Jerusalem has always intrigued me as being one of the great mystical forces on earth.

In the summer of 2006, I had plans to visit Israel. When a war broke out between the Israelis and Hezbollah, the newscasts showed bombs and rockets exploding in Haifa, the Galilee, Beirut, and South Lebanon. The entire country was being drawn into a major confrontation.

It’s important for me to visit Jerusalem, I thought. What I would teach there is diametrically opposed to the fighting in the north: joy, happiness, and love are essential to spiritual practice as well as human dignity, and I wondered how my message would be received in a country at war.