After a night of snow, the streets of New York had mountainous drifts butted up against cars and sidewalks that were being cleared by superintendents and store clerks.  Augustine had to meet Martin at his studio to discuss an editorial job for an art magazine Martin had decided to publish.  While walking on Second Avenue, he heard the shrill laughter of Hymie ‘The Rag’ Goldberg, a six-foot-seven inch Jewish man with the mentality of a five-year old ...

The luckiest or unluckiest person on earth

In November of 2004, Augustine’s friend Lauren asked him to monitor an English composition class that she taught in an Upper West Side New York City high school. She promised him that he would find it interesting, especially a short piece written by an Iraqi student. When the boy’s time came to read, he got up and walked slowly to the front of the class. His hands shook. He could barely face the other students; and when he looked sheepishly ...

Augustine grappled with a prose poem he’d been writing. He tried to create a collage of images, some connected, others not, but all part of a dream sequence that revealed discordant elements he’d seen while walking on the streets of New York City. More dreamlike than practical, he pushed the limits of his talent to bring it together. He finally decided that his vision could be more appropriately painted on canvas than written on paper. He had wracked his thoughts ...

No Good to Anyone, Any more.

Augustine and his girlfriend Neila were sitting together at the rim of the Washington Square fountain. It was noon.

“I’ve been in an old age home since nine o’clock this morning,” Neila said to Augustine.  “My acting teacher wants me to study the habits of old people for a scene.”

She had spent two and one half-hours talking to eighty and ninety year old patients, to geriatric counselors and psychiatrists.  She didn’t learn much, till an old lady named Mrs. Steinbach, told ...

One must write without thinking about forms,
and just because it pours
freely from one’s soul.
– Anton Chekhov – The Seagull

It was early one autumn morning, after a restless night’s sleep, when Augustine, a twenty-two year old student at Hunter College, looked into the bathroom mirror, and it reflected his naked body without a face. Regardless of how long he studied ...

The Piano Man (In a Harlem Jazz Club)

Augustine listened to the piano man’s guttural voice sing the blues.  The noisy smoke filled room was silenced by the power of his words and the complicated riffs he played – a driving life force that lifted him to another realm of understanding.  The audience cheered when the music ended; the piano man continued to finger keys, some harmonic and some atonal.  A drummer joined him, so did a bass player, and a wild-eyed young man of about twenty, hair ...

The following short story (sketch) comes from a collection I just wrote and finished editing called NEW YORK CITY MOMENTS.  The character of Augustine appears in most of the ninety stories that compile the manuscript. 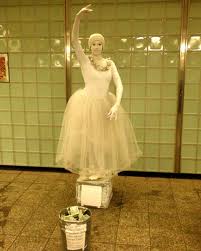 It was 5:00 PM on a Tuesday afternoon.  Augustine had just left a literature class at Hunter College and was on his way downtown to meet his friend Martin at the Whitehorse Tavern. ...