Sarada Devi (December 22, 1853 – July 20, 1920), born Saradamani Mukhopadhyaya, was the wife and spiritual counterpart of Ramakrishna Paramahamsa, the nineteenth century mystic of Bengal. Sarada Devi is also reverentially addressed as the Holy Mother (SriMata) by the followers of the Ramakrishna monastic order. Sarada Devi played an important role in the growth of the Ramakrishna Movement. Though uneducated herself, Sarada Devi advocated education for women. She entrusted her close European friend Sister Nivedita with the implementation of her dream— a girl’s school on the Ganges, where Eastern and Western pupils could study together.[1]

From a very early age she prayed God to have purity in abundance. Looking at the full moon, she would say: “O God, there are dark spots even on the moon. But make my character spotless.” [2] 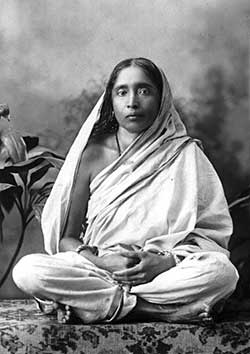 Sarada Devi was born in Jayrambati, a small village near Calcutta. At the age of five she was betrothed to Ramakrishna (as was the cultural tradition of the time), whom she joined at Dakshineswar when she was eighteen. Even though married, both lived lives of unbroken celibacy, showing the ideals of a householder and of the monastic ways of life. Ramakrishna’s frequent spiritual ecstacies and unorthodox ways of worship led some onlookers to doubt his mental stability, while others regarded him as a great saint. Sarada found Ramakrishna to be a kind and caring person. As a priest, Ramakrishna performed the ritual ceremony—the Shodashi Puja where Sarada Devi was made to sit in the seat of goddess Kali. Ramakrishna regarded Sarada as the incarnation of Divine Mother, addressing her as Sri Maa (Holy Mother) and it was by this name that she was known to Ramakrishna’s disciples. [1]

Sarada Devi’s day began at 3 am. After finishing her ablutions in the Ganges, she would practice japa (meditative repetition of a mantra or name of God) and meditation until daybreak. Ramakrishna taught her the sacred mantras, and instructed her how to initiate people and guide them in spiritual life. Except for her hours of meditation, most of her time was spent in cooking for Ramakrishna and the growing number of his devotees. While Sarada Devi remained completely in the background, her unassuming but warm personality attracted some female devotees to become her lifelong companions. Her life was very simple and, characterised by humility, modesty and a loving spiritual disposition. [1] 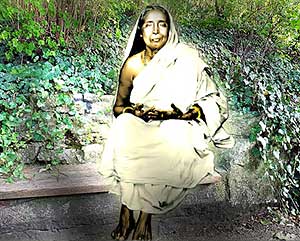 During Ramakrishna’s last days, during which he suffered from throat cancer, Sarada Devi played an important role in nursing him and preparing suitable food for him and his disciples. It is reported that after Ramakrishna’s passing away in August 1886, when Sarada Devi tried to remove her bracelets as the customs dictated for a widow, she had a vision of Ramakrishna in which he said, “I have not passed away, I have gone from one room to another.” According to her, whenever she thought of dressing like a widow, she had a vision of Ramakrishna asking her not to do so. [1]

After Ramakrishna’s passing Sarada Devi received the highest reverence from the Ramakrishna Order and its devotees, and continued to play an important role in the nascent religious movement. She remained the spiritual guide of the movement for the next thirty-four years. Ramakrishna had bade her continue his mission after his passing away and wanted his disciples not to make any distinction between himself and her. [1]

Before Mother Sarada’s death, she gave this last bit of long-remembered advice to her grief-stricken devotees, “But I tell you one thing—if you want peace of mind, do not find fault with others. Rather see your own faults. Learn to make the whole world your own. No one is a stranger my child: this whole world is your own!”. [1]

About Great Swan: Great Swan by Lex Hixon is a dramatic retelling, for contemporary Westerners, of a series of encounters with the great Bengali sage Ramakrishna, who proclaimed the oneness of all religions and the worship of the blissful Divine Mother. In this book Mr. Hixon also gives us an all-too-brief glimpse into the heart and mind of Sarada Devi:

Sarada Devi: My women companions ask me to enjoy more sleep. They say that rising before three in the morning and retiring well after midnight is strenuous. But how can I sleep? I am fully aware of the excruciating suffering of living beings. By silently repeating the Divine Name in the depth of my heart, this universal suffering is gradually transformed into longing and eventually becomes illumination. I see this situation so clearly that it is difficult for me to stop praying in order to sleep, even for an hour. I sometimes think: “Instead of this limited human body, if only I could manifest an infinite Divine Form, perhaps I would be able to do more for suffering creatures.”

A large ant was crawling across the floor, and someone intended to kill it. Do you know what I saw? This precious creature was not really an insect at all but Ramakrishna Paramahamsa. I clearly perceived his blessed hands, his holy feet, his luminous face, his tender gaze. I immediately stopped that person from killing the ant. Mother Reality alone has become every form of life. I would like to care for each living creature without exception. As the Master teaches: “Do not be small-minded. Do not pray for gourds and pumpkins from God, when you should be asking for pure love and pure knowledge to dawn within every heart.” [3]

The young Sarada was walking through the meadows with several companions for the journey to the river Ganga for a holy bath. Her frail body could not keep pace with the sturdier men and women, and she was left to trail behind. A bandit appeared from nowhere and asked her threatening questions. How intelligently Sarada addressed the terrible bandit saying, “Father, I am your daughter, Sarada, on my way to Calcutta to take a holy bath in the Ganga, but my companions have gone ahead.” The sweet and gentle words softened the hard-hearted robber whose childless wife then appeared on the scene. With great affection, Sarada was taken into a humble wayside shop where they rendered her their sweet and sincere service. The next day, the bandit “father” took his adopted daughter to Dakshineswar with great care. The “son-in-law”, Sri Ramakrishna, on hearing the story, paid great respect to this strange “father-in-law”.