Sri Ramana Maharshi (December 30, 1879 – April 14, 1950), born Venkataraman Iyer, was self-realized at the very early age of 16. He became known for posing the elusively simple question to his followers: “Who Am I?”. Today he is now widely regarded as being of one India’s foremost Hindu Saints of the last century. [1] 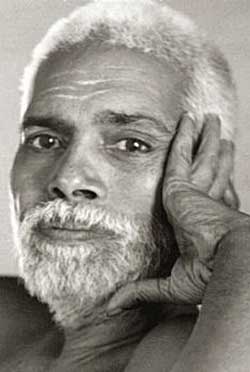 Ramana Maharshi was born to a Tamil-speaking Brahmin farming family. At a young age Ramana was largely disinterested in school and absent-minded during work. But he had a marked inclination towards introspection and self-analysis. He was always seeking to find the answer to the mystery of his own identity and origins.

In the summer of 1896, Ramana went into an altered state of consciousness which had a profound effect on him. He experienced what he understood to be his own death. [2] Sri Ramana wrote of his awakening: “It was the summer of 1896, about 6 weeks before I left Madurai for good (to go to Tiruvannamalai – Arunachala) that this great change in my life took place. I was sitting alone in a room on the first floor of my uncle’s house. I seldom had any sickness, and on that day there was nothing wrong with my health, but a sudden violent fear of death overtook me. There was nothing in my state of health to account for it nor was there any urge in me to find out whether there was any account for the fear. I just felt I was going to die and began thinking what to do about it. It did not occur to me to consult a doctor or any elders or friends. I felt I had to solve the problem myself then and there.

“The shock of the fear of death drove my mind inwards and I said to myself mentally, without actually framing the words: ‘Now death has come; what does it mean? What is it that is dying? This body dies.’ And at once I dramatised the occurrence of death. I lay with my limbs stretched out still as though rigor mortis has set in, and imitated a corpse so as to give greater reality to the enquiry. I held my breath and kept my lips tightly closed so that no sound could escape, and that neither the word ‘I’ nor any word could be uttered. ‘Well then,’ I said to myself, ‘this body is dead. It will be carried stiff to the burning ground and there burn and reduced to ashes. But with the death of the body, am I dead? Is the body I? It is silent and inert, but I feel the full force of my personality and even the voice of I within me, apart from it. So I am the Spirit transcending the body. The body dies but the spirit transcending it cannot be touched by death. That means I am the deathless Spirit.’ All this was not dull thought; it flashed through me vividly as living truths which I perceived directly almost without thought process. I was something real, the only real thing about my present state, and all the conscious activity connected with the body was centered on that I. From that moment onwards, the “I” or Self focused attention on itself by a powerful fascination. Fear of death vanished once and for all. The ego was lost in the flood of Self-awareness. Absorption in the Self continued unbroken from that time. Other thought might come and go like the various notes of music, but the I continued like the fundamental sruti note [“that which is heard” i. e. the Vedas and Upanishads] a note which underlies and blends with all other notes.” [1] 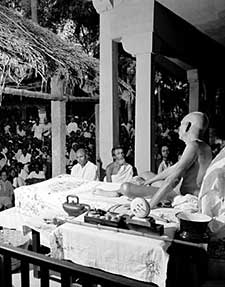 With this glimpse of a higher, immortal consciousness the Maharshi lost all interest in his worldly life, he was plunged into a period of intense meditation on the nature of “Who am I”. Absorbed in contemplations of a higher consciousness, Ramana no longer felt any reason to stay in his home town. Instead he was magnetically drawn to the holy mountain of Arunachala, considered sacred by Hindus, and lived there for the rest of his life.

For several years Ramana maintained a virtual silence because he was so absorbed in his interior meditations. Despite leading the most simple of lives and barely communicating, a group of devoted seekers began to be drawn to him. [3] Instead of giving out verbal instructions he constantly emanated a silent force or power which stilled the minds of those who were attuned to it and occasionally even gave them a direct experience of the state that he himself was perpetually immersed in. [4]

Nevertheless he gave verbal teachings only for the benefit of those who could not understand his silence (or, perhaps, could not understand how to attain the silent state). His verbal teachings were said to flow from his direct experience of Consciousness (Atman) as the only existing reality. When asked for advice, he recommended self-enquiry as the fastest path to moksha (liberation from samsara, or suffering). [1]

Thus gradually an ashram was built around him on the foothills of Arunachala and Ramana Maharshi would start to teach those who came, although he never claimed to be anybody’s Guru. He once said: “My friend, when you are in abysmal ignorance about such a fundamental reality as your own self, why waste your time over such monumental metaphysical questions?” [3] 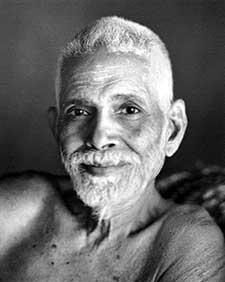 Whatever their reasons for coming almost everyone who came into contact with him was impressed by his simplicity and his humbleness. He made himself available to visitors twenty-four hours a day by living and sleeping in a communal hall which was always accessible to everyone, and his only private possessions were a loincloth, a water-pot, and a walking-stick. [4]

Ramana also initiated people in dreams by gazing intently into their eyes, and he would sometimes travel in the subtle body to visit people. He would appear to a disciple hundreds of miles away as a luminous figure, and the person would recognize his apparence in that form. He noted that one’s waking life and one’s dream life were both a kind of dream each with different qualities of awareness. He referred to them as “dream 1” and “dream 2”. He therefore did not make a big distinction between appearing to a waking disciple and a dreaming disciple since he considered both spheres of existence to be dreams. [2]

He shared in the communal work and for many years he rose at 3 AM in order to prepare food for the residents of the ashram. His sense of equality was legendary. When visitors came to see him— it made no difference whether they were VIPs, peasants or animals— they would all be treated with equal respect and consideration. [4]

The spirit of harmlessness that permeated the sage and his environs made even animals and birds make friends with him. He showed them the same consideration that he did to the humans that went to him. When he referred to any of them, he used the form ‘he’ or ‘she’ and not ‘it’. Birds and squirrels built their nests around him. Cows, dogs and monkeys found asylum in the Asrama. [5]

Throughout the period between I925-50 the center of ashram life was the small hall where Sri Ramana lived, slept and held court. He spent most of his day sitting in one corner radiating his silent power and simultaneously fielding questions from the constant flow of visitors who descended on him from every corner of the globe. He rarely committed his ideas to paper and so the verbal replies given out during this period (by far the most well-documented of his life) represent the largest surviving source of his teachings. These verbal teachings flowed authoritatively from his direct knowledge that consciousness was the only existing reality. Consequently, all his explanations and instructions were geared to convincing his followers that this was their true and natural state. [4] 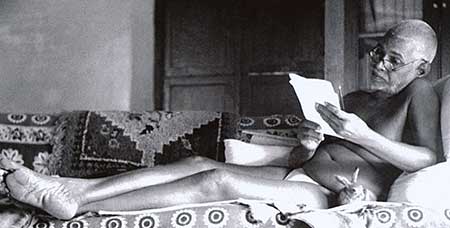 Said Ramana Maharshi: “Know who you are, and all else will be known. Happiness is your real nature. You identify yourself with the body and mind. Feel its limitations and suffer. Realize your true Self in order to open the store of unalloyed happiness. That true Self is the reality, the supreme truth which is the Self of all the world you now see, the Self of all the selves, the one real, the supreme, eternal Self as distinct from the ego, or the bodily idea of the Self.” [6]

For the last 2 years of his life the Maharshi suffered from cancer and experienced great physical pain, but even towards the end he maintained the same tranquil poise and self-same radiant smile. When he was suffering from cancer in the arm a disciple ran away crying because he could not bear to see his master in pain. Ramana only smiled and spoke to a disciple nearby. “Duraswami is crying because he thinks I am suffering agonies! My body is suffering but I am not suffering. When will he realise that I am not this body?” [3]

The French photographer Cartier-Bresson was visiting Ramana’s ashram as Ramana neared death. He noted the following astronomical event which appeared in the night sky over the sacred mountain Arunachala as Ramana died:

“I saw a shooting star with a luminous tail unlike any I had ever seen before moving slowly across the sky and reaching the top of Arunachala, the mountain, disappearing behind it. We immediately looked at our watches. It was 8:47. We raced to the ashram only to find that the master had passed in to Mahanirvana at that exact minute. Nor was this experience only documented by a select few … All the English and Tamil papers which arrived this morning from Madras referred to the meteor which had been seen in the sky over the entire state of Madras at 8:47 on the night of April 14 by a large number of people in different places. These eyewitnesses had been struck by its peculiar look and behavior.”

Ramana who often circumambulated the sacred mountain as an act of worship seemed to be making his final arc around the mountain as a blazing light in the night sky. [2]