Ramakrishna (February 18, 1836 – August 16, 1886), was a famous Bengali sage and mystic of 19th-century India. Ramakrishna proclaimed the oneness of all religions and the worship of the blissful Divine Mother. Many of his disciples and devotees believe he was an avatar or incarnation of God. He is also referred as Paramahamsa by his devotees, meaning “Great Swan”. [1] He gave everyone the freedom and power to pursue Truth along his or her own unique path. 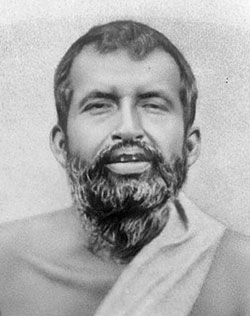 Ramakrishna was born in a poor Brahmin Vaishnava family in Kamarpukur, northeast of Kolkatain of rural Bengal. According to traditional accounts, Ramakrishna’s parents experienced supernatural incidents, visions before his birth. His father Khudiram had a dream in Gaya in which Lord Gadadhara (a form of god Vishnu), said that he would be born as his son. Mother Chandramani Devi is said to have had a vision of light entering her womb from Shiva’s temple. [1]

Ramakrishna describes his first spiritual ecstasy at the age of six: while walking along the paddy fields, a flock of white cranes flying against a backdrop of dark thunder clouds caught his vision. He reportedly became so absorbed by this scene that he lost outward consciousness and experienced indescribable joy in that state. Ramakrishna reportedly had experiences of similar nature a few other times in his childhood—while worshipping the goddess Vishalakshi, and portraying god Shiva in a drama during Shivaratri festival. From his tenth or eleventh year on, the trances became common, and by the final years of his life, Ramakrishna’s samādhi periods occurred almost daily. [1]

He became a priest of the Dakshineswar Kali Temple, dedicated to the goddess Kali, about 6 miles north of Kolkata. It was established by Rani Rasmani, a great devotee. He began to look upon the image of the goddess Kali as his mother and the mother of the universe. He became seized by desire and longing to have a darshana (vision) of Kali—a direct realization of her reality—and believed the stone image to be living and breathing entity. 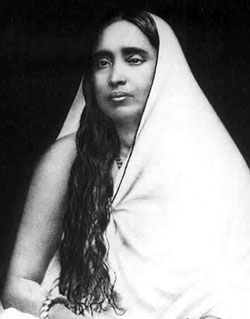 Rumors spread to Kamarpukur that Ramakrishna had become unstable as a result of his spiritual exercises at Dakshineswar. Ramakrishna’s mother and his elder brother Rameswar decided to get Ramakrishna married, thinking that marriage would be a good steadying influence upon him—by forcing him to accept responsibility and to keep his attention on normal affairs rather than being obsessed with his spiritual practices and visions. Far from objecting to the marriage, Ramakrishna mentioned that they could find the five-year-old bride, then known as Saradamani Mukhopadhyaya, at the house of Ramchandra Mukherjee in Jayrambati. Later known as Sarada Devi, the marriage between the two is seen as one of the most spiritual and perfect unions between a man and a woman. [1] Lex Hixon has written “We know that she and Sri Ramakrishna were the same Reality, the same Soul, the same infinite Light manifesting through two bodies.” [2]

After his marriage, Ramakrishna returned to Calcutta and resumed the charges of the temple again, but instead of toning down, his spiritual fervor and devotion only increased. Many of his religious views were based on traditional Hindu thought and practice. He believed that every religion was welcome, and that worshiping a god in any way was better than not worshiping one at all. He became very known for his views on religious tolerance and was seen as a saintly figure to many because of them. [1]

From 1861 Ramakrishna absorbed at a tremendous rate the teachings and initiations of many traditions, including Tantra, Kundalini Yoga, and many Hindu philosophies, even absorbing the esoteric teachings of Islam and Christianity.

As his name spread, an ever-shifting crowd of all classes and castes visited Ramakrishna. In his ever-present state of heightened awareness the God-intoxicated Ramakrishna would hold audience with many seekers, friends, and dignitaries, sharing stories of spiritual life, singing songs, answering questions, and otherwise inspiring to dizzying heights the crowds who showed up. At the heart of it says Lex Hixon, “his manifestation was basically the inspiration of Divine Mother, the inspiration of God as feminine.” [2]

Ramakrishna practised several religions, including Islam and Christianity, and recognized that in spite of the differences, all religions are valid and true and they lead to the same ultimate goal—God.Ramakrishna’s proclamation that jatra jiv tatra Shiv (wherever there is a living being, there is Shiva) stemmed from his Advaitic perception of Reality. His teaching, “Jive daya noy, Shiv gyane jiv seba” (not kindness to living beings, but serving the living being as Shiva Himself) is considered as the inspiration for the philanthropic work carried out by his chief disciple Vivekananda. [1]