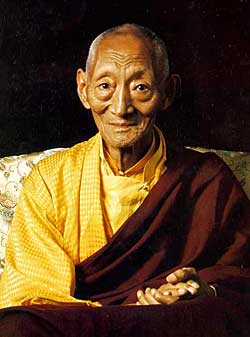 Kyabje Kalu Rinpoche (1905 – May 10, 1989) was a yogi, scholar, and teacher of the Karma Kagyü and Shangpa Kagyü traditions — and one of the great meditation masters of the Buddhist tradition. His teachings were sought by lamas of all four schools of Buddhism in Tibet. He taught extensively around the world, and established many Dharma centers in Europe and North America. [1] [2] [3]

The following story is excerpted from A Deeper Surrender: Notes on a Spiritual Life. Stuart writes:

After Rudi died, I went to India and met a Tibetan teacher named Kalu Rinpoche with whom I sat for a few hours a day for three days. The meeting turned out to be one of the most remarkable experiences of my life. In fact, it was so remarkable that the meeting became legend in Kalu Rinpoche’s Tibetan Buddhist community.

He lived in Sonada Monastery just outside of Darjeeling. Two Tibetan lamas took a student of mine and me to meet Rinpoches in monasteries in and around Darjeeling. When we came to Sonada monastery, scores of burgundy-robed Tibetan lamas sat in the yard. We asked to see Rinpoche.

The lama went inside. He came out with a surprised look on his face. “Rinpoche will see you,” he said. He then took us to Kalu Rinpoche’s quarters. Rinpoche lay in bed with the covers up to his neck. He had an ascetic, sweet old face with large, black, compassionate eyes— a beautiful face, now pale and sallow. He looked like he was ready to leave the world. We sat down at his feet. By way of a translator, he greeted us. He asked our names, where we came from, and then he talked for an hour about Tibetan Buddhism and Tibetan Buddhist lore. Both my student and I sat at his feet in a state of deep meditation. When he ﬁnished, I asked him if we could return tomorrow. He said, “Yes.”

The next day, when we entered his quarters, Rinpoche was sitting cross-legged in robes on his bed. Once again, we sat down at his feet and began meditating. He talked for at least an hour. When he ﬁnished, I asked him, “Can we come back and see you again tomorrow?” He said, “Yes.” As we walked out of the monastery, my student told me he once read a book on Tibetan Buddhism that spoke about tummo (a practice associated with the subtle body of energy-channels), one of the Six Disciplines of Naropa, a form of Tibetan Buddhist meditation very similar to our meditation practice. I thanked him. I now had questions to ask Kalu Rinpoche. 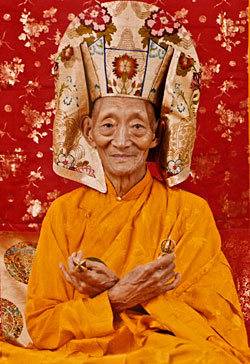 The next day, when we returned to Rinpoche’s quarters, he was sitting cross-legged in full teaching regalia on a throne chair. We sat down at his feet. “Rinpoche,” I asked. “Could you please talk about the Six Disciplines of Naropa, specifically the discipline of tummo?”

Rinpoche spoke for three hours on all facets of Tibetan yoga. He gave us a complete Tibetan Buddhist education. At the end of his discourse, he stopped talking for a moment. Then he said, “When I was a young tulku in Tibet, if I wanted to see my rinpoche, I’d have to wait on line for three hours. Many lamas had questions about their spiritual lives. There were great lines in front of my rinpoche’s quarters. Today, I have to look for people to teach.”

Hundreds of lamas sat in the Sonada Monastery courtyard turning prayer wheels, counting japa beads, but not one of them understood the true nature of Rinpoche’s illness. He was the proverbial cow that needed to be milked, a teacher needing to give his teachings away. Students must make a conscious effort to receive teachings from their guru. If they don’t milk the cow, the cow’s tits dry up. The cow will shrivel up and die. So God sent my student and me to Kalu Rinpoche. We came from Texas to “milk” an underused Tibetan rinpoche. The translator told me that in thirteen years of living in Rinpoche’s monastery he had never heard the teachings Kalu Rinpoche gave to my student and me.

Many years later in San Francisco, another student of mine met a Tibetan Buddhist practitioner, a close follower of Kalu Rinpoche. He told my student a strange tale that became legend in their monastery. “It was 1975,” the man said. “Rinpoche was dying. Two seekers came from the west to sit with Rinpoche. Their hunger for a spiritual life was so strong it drew out of Rinpoche teachings that not only gave them life, but Rinpoche as well. They healed Rinpoche of a serious illness.”

His Holiness, the 16th Gyalwa Karmapa, once said Kalu Rinpoche was an incarnation of Milarepa, the great Tibetan saint. Born of devout practitioners, Kalu Rinpoche entered his first Three Year Retreat at the age of 16. He then went into solitary retreat for 12 years in the mountains of Tibet, before becoming Abbot of his own monastery. [4]

Kalu Rinpoche was highly revered by the heads of all the major and minor Tantric schools of Tibet. His respect for all religious traditions was shown in his personal meeting with Pope John the 6th in 1970. In the late 1960s Kalu Rinpoche began to attract Western disciples in India.[4] In 1971 the Karmapa asked him to travel to the West as his representative. Henceforward, Rimpoche’s work would not only be to preserve the Vajrayana doctrines in pure form during the period of upheaval in Tibet, but also to gradually introduce non-Tibetans to the ancient teachings.[5] Soon he was teaching extensively in the Americas and Europe, and during his three visits to the West he founded over 65 teaching centers in over a dozen countries. [4]

At 3:00 P. M., Wednesday, May 10, 1989, Khyabje Kalu Rinpoche died at his monastery in Sonada. On September 17, 1990 Rinpoche’s tulku (one who is consciously determined to take birth, often many times, in order to continue his or her Bodhisattva vow) was born in Darjeeling, India. Chamgon Tai Situ Rinpoche officially recognized Kalu Rinpoche’s yangsi (young reincarnation)— now known as Kalu Rinpoche Yangsi— explaining that he had received definite signs from Kalu Rinpoche himself. Situ Rinpoche sent a letter of recognition to His Holiness the Dalai Lama who immediately confirmed the recognition.[1] It is said that because of Kalu Rinpoche’s great compassion and kindness, he took birth again in answer to the prayers of his disciples. [2]

1. Wikipedia: Kaul Rinpoche
2. Kagyu Thubten Chöling
3. Rigpa Shedra
4. Live in Prayer
5. The Crystal Mirror: Clearly Showing All The Steps By Which The Path Of Liberation Is Traversed In This Fortunate Kalpa, Kalu Rinpoche