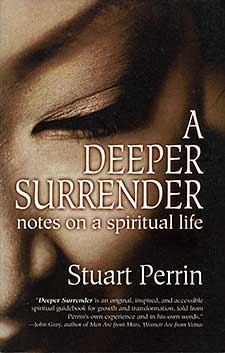 “A deeper sense of surrender…” These were the last words Stuart Perrin’s spiritual teacher said to him before being killed in a plane crash. For years, Perrin had sought insight and spiritual teaching throughout the world, only to finally find them in the laughing, Buddha-esque form of Rudi, a popular, iconoclastic, Jewish-American guru.

In A Deeper Surrender, Perrin distills Rudi’s teachings— while adding a generous measure of his own— on relationships, sex, livelihood, spiritual development, teachers, students, yoga, and perhaps most importantly, staying centered and getting grounded.

The teachings are full of paradox. We fight and we surrender, we struggle and we let it happen, we engage and disengage, we advance, retreat, study with a teacher, go it alone.

How could it be otherwise? Spirit is so overwhelming, so mysterious, so real, as to dwarf our conceptions and belief systems. Simply put, find your own path to spiritual growth as it unfolds in front of you. A Deeper Surrender is an indispensable guidebook for treading a spiritual path without getting stranded, distracted, or lost.

In the Bhagavad-Gita, Krishna reveals himself to Arjuna. He talks about the light of a thousand suns appearing in the sky, of the entire human race rushing headlong into ﬁre, of energy more powerful, more unimaginable, and more omnipotent than anything the human mind can comprehend. We’re given the feeling the vision described (as powerful as it may be) is perhaps the small toe of God. He’s not talking about wimpy, holier-than-thou, lackluster energy. He’s talking about creation from the beginning to the end of time, about what exists before and after Genesis and Armageddon, about aeons of light and ﬁre transcending all human comprehension. The chakra system is the link to all this. It’s connected to very powerful energies, but ﬁrst we have to learn to be human. Then, we further develop a chakra system strong enough to channel God’s energy. It’s easy to forget that we’re born on Earth and that we have responsibilities. We have karma to work out, service to do, and we’ve got to learn to love and be happy and to separate what’s real from what’s an illusion...

“A Deeper Surrender is an original, inspired, and accessible spiritual guidebook for growth and transformation, told from Perrin’s own experience and in his own words.” —John Gray, author of Men Are From Mars, Women Are From Venus

“Stuart Perrin is the embodiment of a spiritual teacher who has successfully integrated Eastern philosophy with the Western way of living.” —John Renesch, futurist; business philosopher; co-author of Getting to the Better Future: A Matter of Conscious Choosing; editor, New Traditions in Business: Spirit and Leadership in the 21st Century

“Mastering the inner life of the human being” is definitely not for wimps because it requires consistent surrender. Surrender in America has a bad rap; it often is misconstrued as weakness or lying down to let others walk all over you. Stuart Perrin offers the reader another vision of the meaning of surrender. He applies the term to a freedom from the confines of external living and relief from the terror of your inner fears. Stuart teaches meditation practice and personal maturation through spiritual work. The fastest way to the freedom and relief described above is through meditation. I wholeheartedly agree! Surrender is a natural side-effect of daily meditation. Stuart has an opinionated and delicious writing style that I enjoyed immensely. Read it slowly so you may savor its many inferences underneath the writing, and then meditate on it.” —Dr. Joan McNeill for Awareness Magazine